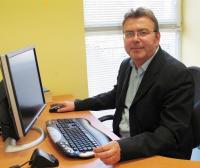 Jean-Luc Puel started his scientific career in Montpellier in 1983 in the Inserm’s laboratory U254 (Laboratoire Neurobiologie de l'Audition) directed by Professor Rémy Pujol. In 1986, he defended his PhD thesis "frequency selectivity in rats during development and after ototoxic drugs administration" and joined Professor Richard P. Bobbin's laboratory (Department of Otorhinolaryngology, Louisiana State University, New-Orleans) as a post-doctoral fellow. During his postdoctoral training, he developed several research programs on the pharmacology of the cochlea. In 1989, he came back to France and was appointed as a researcher by the CNRS to develop pharmacological therapies of the inner ear. In 1998, Jean-Luc Puel became Director of Research at the CNRS. Later on, he obtained a position of Professor of Neuroscience at the University of Montpellier 1 and became director of the “Research centre for hearing aids” (CREFA) in 2001. During this period, he actively participated with Christian Hamel, Jean Valmier and Alain Privat to the creation of the Institute of Neurosciences of Montpellier (INM-Inserm U583). This institute, in which he manages the team of “Physiology and Therapy of the Inner Ear”, has been inaugurated in 2003.
Main achievements :
During his career, Jean-Luc Puel published 88 papers in international journal (h‑index : 27), 25 book chapters and more than 200 communications or posters. He is member of the Editorial Board for International Journals, scientific committees and societies. In addition to the fundamental researches, he took out 3 patents for potential tinnitus and deafness treatments and promoted clinical transfer of fundamental research.

Jean-Luc Puel's research interests are focused on the normal and pathological functioning of the inner ear. They include researches on the maintenance of cochlear fluid homeostasis, on the coding of the sensory message and on the promotion of post-traumatic regeneration of sensory epithelia. Interests are also clinically oriented researches on cochlear pathologies such as tinnitus and deafness.