The impedance of an acoustic system reflects its ability to transmit a sound wave. It is defined by the relationship between the acoustic pressure of the sound wave and the displacement velocity of the molecules in the propagation medium of the sound wave. Each medium has its own impedance. The ossicular chain in the middle ear plays the role of impedance adapter between the air of the ear canal and the fluid of the cochlea by optimising energy transfer. In clinical audiology, impedance audiometry is the evaluation of the integrity and correct function of the ossicular chain, using different tests: tympanometry and measurement of the stapedial reflex.

Impedance audiometry involves sealing the ear canal with an acoustic probe combined with a pressure pump. Reference sounds are played whilst the pressure is rapidly changed. The difference between the pressure emitted and that recorded by the probe depends upon the impedance of the middle ear. It is therefore possible to determine the amount of sound energy absorbed by the tympanic membrane.

Impedance audiometry is carried out by a soft probe that adapts to the size of the ear canal. This probe comprises 3 channels: one linked to a loudspeaker that produces the reference tone; one linked to a microphone that receives the sound emitted after absorption by the eardrum, the ossicular chain, and the middle ear; and one enables air pressure to be varied within the ear canal.

Tympanometry is used to evaluate the integrity of the middle ear, including the eardrum, the ossicular chain and the middle ear cavity. A 226Hz pure tone allows the rigidity and mobility of the eardrum to be studied. At this frequency the admittance (the opposite of impedance) and compliance can be determined.

An intact, unperforated eardrum is required to carry out tympanometric testing. It is also important to take care when testing a very thin and fragile eardrum. 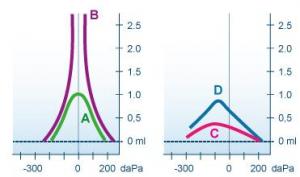 Varying the pressure in the ear canal between +200 and -400 daPa enables the creation of a tympanogram of tympano-ossicular and middle ear compliance. Curve A shows normal compliance of the eardrum, ossicles and the middle ear (sharp peak centred around 0 daPa, with variance from -100 to 100).

Curve B shows a break in the ossicular chain or a flaccid eardrum (too much mobility).

Study of the stapedial reflex

During acoustic stimulation at intensities over 80 dB, in a normal ear, the stapedial reflex causes a contraction of the stapedial muscle leading to an increase in the rigidity of the tympano-ossicular chain by withdrawing the stapes. This is a bilateral and spontaneous reflex loop to protect the inner ear from intense sounds. It uses the auditory nerve as an afferent pathway and the facial nerve (VII crainal nerve) as an efferent pathway.

One clinical application for measuring the stapedial reflex is localising damage to the facial nerve in the case of facial paralysis.

In the case of facial paralysis 'a frigore' (which is the most common cause but only diagnosed by process of elimination), the stapedial reflex is absent. When one can be observed, it suggests that the lesion is located more centrally than the stapedial muscle (tumour distal to the third portion of the nerve, intraparotid tumour), as the reflex loop is preserved.