The brainstem, a posterior structure of the brain, comprises the medulla oblongata, the pons and the midbrain.

The auditory pathway, like that of other senses (except for smell and sight),  passes through a number of relay stations within the brainstem. These nuclei each have a specific role: the cochlear nucleus, the superior olivary complex, the lateral lemniscus and the inferior colliculus.

General organisation of the brainstem 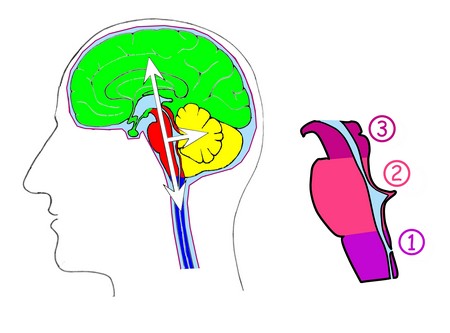 The brainstem assures the link between the spinal cord (blue) and the cortex (green). It derives from the three main vesicles: the myelencephalon, which gives rise to the medulla oblongata (1), the metencephalon, which gives rise to the pons (2) and the mesencephalon (3). It is also a compulsory pathway between the cortex and the cerebellum (yellow).
NB. for a general schematic of the auditory pathway, see the page "Overview"

From the cochlea to the brainstem 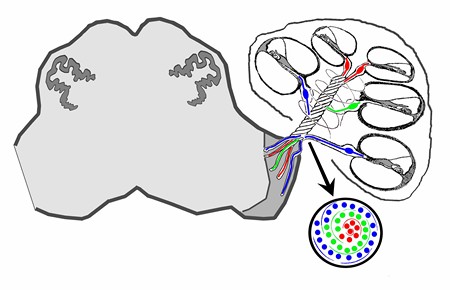 The auditory nerve penetrates through the skull and forms a first relay station at the level of the cochlear nuclei.

Nerve fibers entering the cochlear nuclei are distributed in an organised, tonotopic, manner: those that come from the apex of the cochlea (low frequencies) remain at the surface of the cochlear nuclei, whereas those of the base (high frequencies) penetrate deeper into the nuclei. This distribution allows each frequency to activate neurones located in a band that is sensitive to stimulation from a specific frequency known as isofrequency laminae. 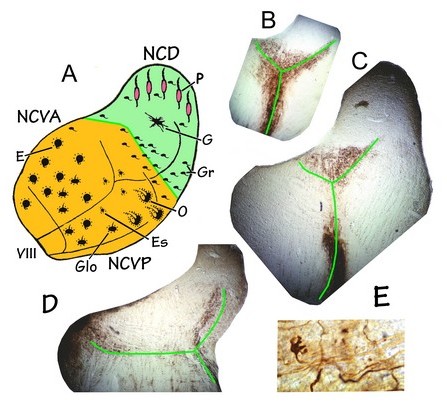 In this diagram, you can see the tonotopic 'V'

The cochlear nuclei decode intensity, analyse various temporal parameters such as duration (long or short sounds) and the start and end of a sound stimulus, and maintain and transmit the frequency analysis carried out previously at the level of the cochlea.

The function of each type of neuron is well defined. They have the essential role of completing the frequency and intensity analyses started at the cochlea.

The cochlear nuclei have numerous internal circuits with excitatory or inhibitory connections between neurons, which contribute to the analysis of the auditory signal and its distribution towards the higher centres of the auditory system, starting with the the next relay centre: the superior olivary complex.

Projections from the cochlear nuclei

Certain neurons in the cochlear nuclei project towards other nuclei. These contralateral projections form the acoustic stria. 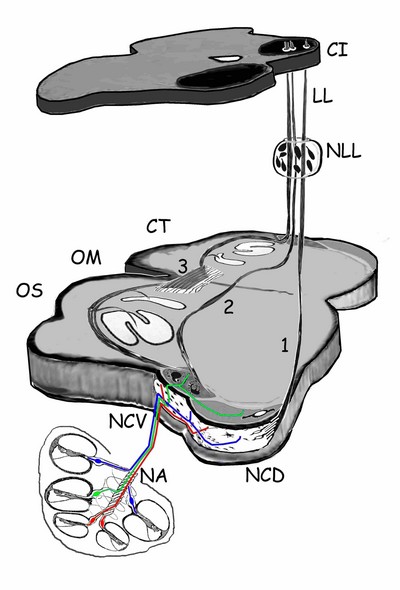 1 - Dorsal stria, or 'stria of von Monakow', formed mainly by the nerve fibers of the pyramidal and multipolar cells in the DCN. After crossing over, these fibers project up through the lateral lemniscus (LL) to synapse in the inferior colliculus (IC)

2 - Intermediate acoustic stria or 'stria of Held', formed by the axons of the octopus cells in the VPCN which cross the midline and project to the contralateral LL.

3 -Ventral acoustic stria, or trapeziod body. The most complex of the stria, formed by the axons of most neurons in the AVCN (spherical, globular and multipolar), which send their axons bilaterally to the neurons in the superior olivary complex (SOC). The fibers of the olivary neurons project via the LL and synapse primarily with neurons in the IC.