The anatomical and functional characteristics of the human auditory cortex are very complex, and many questions still remain about the integration of auditory information at this level.

The first studies linking the structure and function of the cerebral cortex of the temporal lobe with auditory perception and speech were carried out by Paul Broca (1824-1880) and Carl Wernicke (1848-1904). Descriptions of Broca's aphasia (speech disturbance caused by a lesion in Brodman's areas 44 and 45 -also now known as Broca's area) and Wernicke's aphasia (a distruption in speech perception caused by damage to Brodman's area 22) enabled the location of hearing and speech processing to be determined within cerebral cortex.

Function of the Auditory Cortex

In AI, neurons are selective for particular frequencies and are arranged in isofrequency bands that are tonotopically organised. The precise spatial distribution of the isofrequency bands is related to the organisation of the auditory receptors. Their activity depends upon the characteristics of the stimulus: frequency, intensity and position of the sound source in space. Functionally, this region is strongly influenced by the waking state of the subject. A number of very specific neurons in AI are also involved in the analysis of complex sounds.

New techniques for studying the cerebral cortex (functional magnetic resonance imaging: fMRI; positron emission tomography: PET; and magnetoencephalography: MEG) suggest that the frequency distribution seen in animals (with traditional experimental methods) does not correspond exactly to that seen in humans, although they all have isofrequency bands, as seen using MEG below. fMRI in humans suggests that low frequencies are encoded in the superficial posterolateral regions of the sylvian fissure, whereas high frequencies are located in the deeper and anteromedial regions. It is important to note, however, that a degree of variation exists between individuals.

When awake, humans, like other animals, are able to perceive the small temporal variations of complex sounds. These variations are essential to the comprehension of human speech. A number of studies investigating AI have identified that in awake primates, two distinct populations of synchronous and asynchronous neurons (respectively) encode sequential stimuli differently.

The functional division of the auditory cortex enables temporal variations of a stimulus to be decoded extremely accurately compared to other centers of the auditory pathway. It allows more information to be obtained about complex sounds, as well as the location of a sound source and its motion. 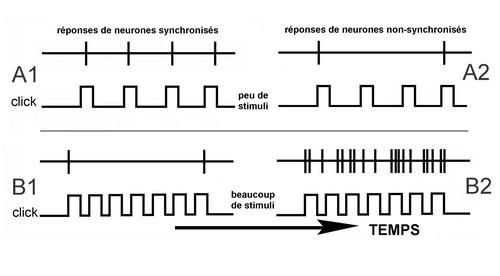 Animal vocalisations and human language vary greatly between individuals. Voluntary and involuntary variations also exist within the same subject. Although the perception of auditory messages requires analysis of the frequencies that make up a complex sound, spectral analysis is even more important.

If the sound spectrum containing the entire soundwave profile of a complex sound (the sound envelope) is maintained, good hearing and phoneme comprehension can occur, even when certain specific frequencies are removed.

Non-invasive MEG imaging can be used to accurately determine with excellent spatial precision, the location of evoked activity that occurs in a few milliseconds. MEG is an appropriate technique to study complex auditory function, such as speech, as well as the potential functional effects of cortical damage.