In humans fetuses, the organ of Corti begins its differentiation at 9 weeks of gestation (wg). The following set of Nomarski and SEM pictures illustrates the main stages of its development. A timing correspondence between humans and different mammals is given in table I (bottom of the page).

The coiling of the cochlear spiral has occurred (left). However, the sensory epithelium is not yet differentiated (right) - only a ridge and some filaments of the nascent tectorial membrane (arrows) mark its location.

Nomarski section from cochlea of an 11 wg fetus. The white arrow points to the tectorial membrane.
scale bar : 20 µm

Insert: swollen nerve endings (blue arrows in inset) are concentrated below the newly differentiating hair cells. A red arrow points to the IHC.

Des Supernumerary hair cells are frequently and temporarily encountered during the development of the human organ of Corti, between stages 3 and 4 ( ref c4). As shown here (14 wg, left; 20 wg, right) 2 rows of IHCs (red arrows) and 4 or 5 rows of OHCs (blue arrows) are often seen, even in the basal turn.

Stage 5 : End of morphological differentiation of the organ of Corti (30 weeks' gestation in the human)

Table I: timing of maturation of the organ of Corti in different species

Table II: comparative development of the cochlea and the auditory brain in both humans and rats 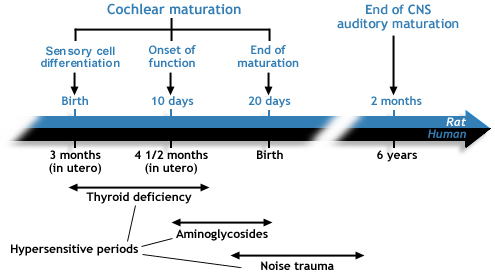 This table recalls stages 2,4, and 5 (see above) of cochlear maturation and highlights the late development of the auditory brain. Actually, to mature properly, the brain requires the cochlea to be fully mature and functional.

The hypersensitive periods to three major deleterious factors of cochlear development are indicated. During these periods the cochlea is much more susceptible than in adulthood.