Inner hair cells code the frequency and intensity of acoustic stimuli into a neural signal, which is then transmitted to the brain via the auditory nerve.
Note: Figure legends are temporarily in French

Frequency coding in the mammalian cochlea is linked to cochlear tonotopy. However, for sounds with low frequencies (under 3 kHz), which are encoded by the apex of the cochlea, frequency coding depends on a second mechanism: phase locking at the level of the IHC.

Acoustic stimulation causes the stereocilia to deflect, stretch-sensitive ion channels open, and this causes an influx of cations into the hair cell. The latter depolarises, causing voltage-sensitive calcium channels to open. The influx of calcium promotes the release of glutamate into the synaptic cleft, effectively activating the auditory nerve fibres and resulting in action potentials.

In response to acoustic stimulation of increasing intensity, neuronal activation (the number of action potentials) increases with sound intensity. This is known as intensity coding.

Auditory nerve fibres can be divided into three types: 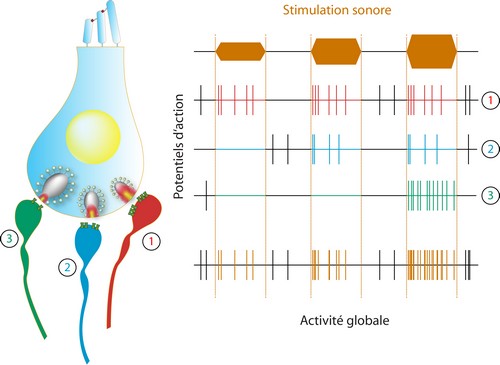 Progressive recruitment of these three populations of nerve fibres can explain the extent of cochlear dynamics from perceptual threshold to the pain threshold (110 dB at 1000 Hz): in response to a weak stimulation, the low-threshold fibre (1, in red) is activated but becomes saturated very quickly. More intense stimulation causes the recruitment of fibres 2 and 3. Note that spontaneous activity occurs in absence of acoustic stimulation (black). Dotted lines indicate the beginning and the end of the acoustic stimuli, and isolate the evoked activity of the fibres.

Evoked activity of a fibre connected to the IHC

The post-stimulus time histogram (PSTH) shows evoked activity in response to acoustic stimulation. It is characterised by an increase in activation at the beginning of the stimulus (‘on response’), followed immediately by a decrease in evoked activity (‘adaptation’) until it reaches a constant discharge rate (‘plateau’). 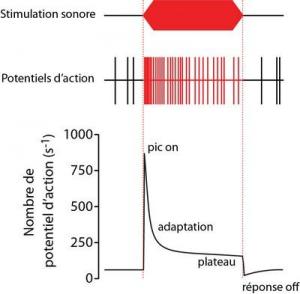 The on response corresponds to the release of the neurotransmitter glutamate by the IHCs.
The adaptation can reflect: (i) the activation of the rapid IHC potassium conductance, (ii) the depletion of the fast-releasing synaptic vesicles, (iii) the desensitisation of post-synaptic glutamate receptors, and (iv) the refractory period of the action potential.
Stopping the acoustic stimulation is associated with a drastic decrease in the fibre’s discharge rate. This ‘off’ response could reflect the excessive glutamate recapture by the membrane transport proteins.