To date, research shows that mammalian cochlear hair cells do not regenerate, either spontaneously or after damage. However, lower vertebrates (fishes, amphibians, reptiles, and birds) can spontaneously regrow hair cells, under normal conditions and/or after damage. Hair cell regeneration allows birds to hear again. These findings provide hope that, if hair cell regeneration were to be stimulated in mammals, the new hair cells would be sufficient to restore hearing function.

In their studies of birds, researchers confirmed that hair cells that are regenerated after damage in the auditory system can restore hearing. In other words, regenerated hair cells are effective in sending neural signals from the inner ear to the brain for processing and in this manner, they enable birds to hear with almost the exact same sensitivity as before damage.

This regeneration can happen in one of two ways: 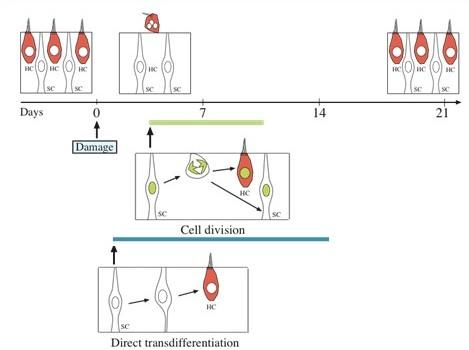 The Transition from Supporting Cell (SC) to Hair Cell (HC)

When hair cells are dying, supporting cells receive signals that encourage them to start the process of regeneration. These signals involve many changes in protein activities that act together to determine the exact fate of each supporting cell. Many of these proteins have been found to be active during the development of the inner ear. During regeneration, these signals can be activated within a matter of hours after hair cells are damaged, resulting in restoration of hair cells to near-normal levels only 4 weeks later.

Various proteins found in supporting cells are linked to either promoting or reducing the ability of a supporting cell to differentiate as a hair cell after damage to the sensory epithelia. During embryonic development, it was found that the basic helix-loop-helix transcription factor named atonal homolog 1, or Atoh1, is both necessary and sufficient for hair cell differentiation of the mammalian inner ear. Due to this crucial role in development of hair cells, Atoh1 has become a prime candidate for stimulating hair cell regeneration. In the past decade, various labs have used techniques that stimulate Atoh1 expression in auditory supporting cells, which have produced mixed results. During the early postnatal period, Atoh1 overexpression promotes supporting cell conversion into hair cells, whereas in mature mammals, effects of Atoh1 appear to be more limited.

While Atoh1 promotes cells to turn into hair cells, proteins in the notch signaling pathway act to block hair cell regeneration. Signaling through the notch receptor is responsible for a process called lateral inhibition, which is active during development of the auditory epithelium to ensure that the correct number and pattern of hair cells and supporting cells are attained. Notch accomplishes this task through a series of molecular interactions, including the activation of transcription factors that inhibit Atoh1 expression.  Notch receptors are expressed on the surface of developing supporting cells, and notch binding proteins are expressed on the surface of developing hair cells.  When the notch receptor is bound by a notch binding protein (DSL proteins such as Delta), a part of the notch receptor (the notch intracellular domain or NICD) is cleaved by an enzyme called gamma secretase, and the NICD translocates to the nucleus. Once in the nucleus, the NICD can activate inhibitory transcription factors and block Atoh1 expression in the supporting cell, preventing it from differentiating into a hair cell. Inhibition of notch signaling after hair cell damage in mature animals leads to an increase in the number of supporting cells that transdifferentiate into hair cells, in fish, birds, and mammals.  Thus, notch inhibitors are potential agents that are being actively examined for their capacity to promote hair cell regeneration and auditory recovery in mammals.
In addition to Atoh1 and the notch signaling pathway, there are many other proteins that control hair cell regeneration that remain to be identified.

Hope for regenerative therapies first emerged in the 1980’s when it was discovered that the inner ear of birds can regenerate hair cells that have been damaged by drugs or noise trauma and reconnect them to the brain. Many research groups around the world have since been trying to reproduce this regeneration in the mammalian cochlea. No luck so far: mammalian auditory hair cells cannot be regenerated!
Research continues in two directions.

One is to manage to 'wake up' some dormant stem cells that can be found in the adult cochlea.

The other (B) is to try to graft embryonic stem cells into the cochlea, then help them to differentiate into hair cells to take the place of those that are missing.

In both of these cases, we would then need to help the new hair cells connect to the brain.
The challenge is great, and we cannot, at this stage, tell whether these methods will work, nor give a date of a potential therapy using this technique.

When hair cells are lost in the non-mammalian vestibular system, they are readily regenerated.  In birds the new hair cells are effective in restoring balance function.  The vestibular organs are different from the auditory organs because their hair cells undergo continual turnover (death and regeneration), even in the absence of hair cell damage.
Several studies have shown that mature mammals (rodents) can also regenerate some of their vestibular hair cells in after hair cell damage. In newborn rodents, hair cells are readily replaced by supporting cell division and possibly by direct transdifferentiation.  However, as rodents mature into adulthood, the number of supporting cells that divide is severely reduced. Only a subpopulation of hair cells is replaced, apparently by direct transdifferentiation.
The presence of some spontaneous hair cell regeneration in response to hair cell loss in mammals provides researchers with the opportunity to study mammalian hair cell regeneration and find experimental ways to boost it.