Psychoacoustics combines the study of acoustics and auditory physiology to determine the relationship between a sound’s characteristics and the auditory sensation that it provokes. Loudness is the subjective measure of perceived sound intensity. This sensation, which is mainly related to sound pressure, allows us to distinguish between loud and soft sounds.

Discomfort level
The discomfort level corresponds to the lowest sound pressure level required to produce a feeling of discomfort. It varies from person to person and for each sound frequency.

Normal thresholds
Normal absolute and discomfort thresholds are determined by the average thresholds recorded from a large number of normal hearing people.

At audible frequencies, the area between the absolute threshold of hearing and the discomfort threshold determines a person’s auditory field. The dynamic range of this field is the distance between the two threshold. 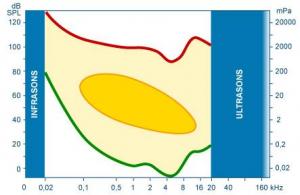 Note: All frequencies below 20 Hz are qualified as ‘infrasounds’, even though some animals (such as moles) can perceive ‘sounds’ as low as a few Hertz: their auditory range extends an octave or two lower than in humans. In a similar way, sounds that are above 20 kHz are called ‘ultrasounds’, even though dogs can hear sounds up to 40 kHz, and bats an impressive 160 kHz, which corresponds to two or three octaves higher than in humans.

An equal-loudness contour depicts all pure tones that produce the same loudness sensation in function of frequency (as defined in the international standard ISO 226:2003) . 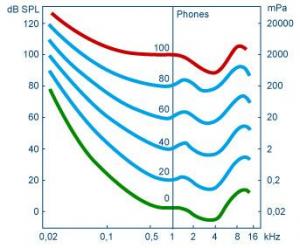 This graph represents the average equal-loudness contours of 50 normal-hearing young people, recorded in an anechoic chamber with bilateral freefield sound presentation. The unit of measure for these contours is the phon, which corresponds to the sound level (in dB SPL) at 1 khz. For example, a 1 kHz pure tone presented at 20 dB SPL will be equal to 20 phons, as will a 100 Hz pure tone presented at 43 dB SPL.

Note: The phon is only equal to the dB SPL for a 1 kHz sound.

The phon is a unit of equal sensation, and not of sensation per se. Therefore, a second unit is also used: the sone

For levels above 40 phons, and for medium frequencies, the sone is linked to the phon by the equation: 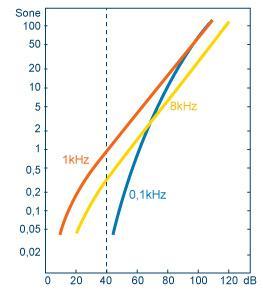 Loudness evolves differently depending on frequency. The loudness of a 0.1 kHz sound increases much faster than sounds of 1 and 8 kHz. This translates the idea that the dynamic range at this frequency is smaller to that of a 1 kHz or 8 kHZ sound (see above ‘Auditory Field’).

The jnd is the smallest physical intensity variation that causes a change in loudness. It is reliant on both the intensity and the frequency of the sound. At higher intensities, the ear is capable of distinguishing intensity difference of 0.4 dB. It is estimated that there are around 150 levels of loudness.

Critical bands can be assimilated to a battery of band pass filters which have cutoff frequencies that are variable along the cochlea but fixed compared to the frequency composition of the sound. 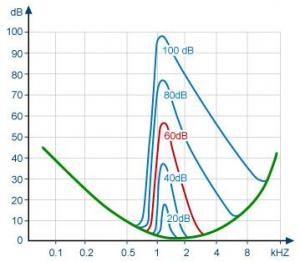 This figure shows hearing thresholds obtained without masking in green and with a broadband noise masker (from 1100 to 1300 Hz) across different intensity levels.

The red trace shows the modification of hearing thresholds obtained with a noise level of 60 dB SPL. For example, a pure tone of 1000 Hz will only be heard from 45 dB SPL, instead of 3 dB in the absence of a noise masker.

Another form of masking also exists. Known as ‘informational masking’, this is the modification of the perception of a sound’s intensity at a central level. For example, when a pure tone is presented to one ear, and a noise masker to the other, the central effect of the noise masker alters the loudness of the pure tone. In this way, masking occurs even when the masker is presented to the other ear.

Other factors that influence loudness

Duration
Loudness increases to a critical value between 50 and 400 ms before decreasing slightly.

Predictability
When a listener expects a loud sound, its loudness is lower than if the sound is not expected.

Stapedial reflex
This reflex occurs principally for brief sounds of mid-frequency presented over 80 dB. It acts by rigidifying the ossicular chain, resulting in a dampening of the sound vibration, and therefore a decrease in loudness. However, this reflex can suffer fatigue.

Fatigue
After the ear is exposed to a sound that is too intense, an increase in hearing threshold can occur, due to nerve fibre fatigue. This is apparent when leaving a nightclub or after prolonged use of personal MP3 players.