The sensation of pitch allows us to qualify a sound as low or high. This perceptual characteristic is essentially linked to frequency. Timbre is a more complex notion, allowing the distinction between two sound sources outputting the same sound signal. Timbre is essentially derived from the spectral composition of a sound.

Frequency discrimination refers to the ear’s ability to perceive the difference between two pure tones of different frequencies, but the same sound level, presented sequentially..

Buser (1987) or Zwicker showed that for sound intensities between 40 and 70 dB, the smallest variation of pitch that a healthy ear can detect relative to a reference frequency is 0.0035. This relative threshold is true for frequencies between 200 and 5000Hz. At more extreme frequencies, pitch sensitivity is greatly decreased.

Frequency selectivity refers to the ability to distinguish between two sounds that are produced simultaneously. It can be demonstrated using electrophysiology, but also using psychoacoustics. 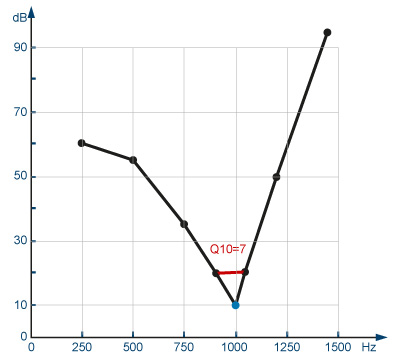 This graph shows the minimal intensity required for a sound of a particular frequency (shown on the x axis) to mask the test frequency. For example, a masking sound of 750 Hz would need to be presented at 35 dB in order to mask a 1000 Hz sound presented at 10 dB.

The Q10 is considered to be normal when it is greater than 4.3.

Just like for loudness, there exists a scale to indicate the relative perception of two sounds of different pitch: this is the mel scale, which has the mel as its unit. 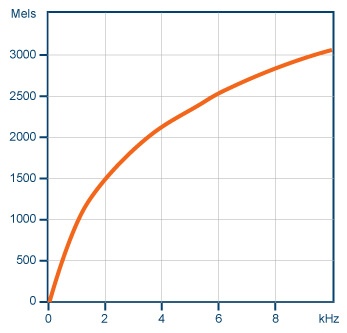 Under 500 Hz, pitch increases linearly with frequency: the Hz scale is equal to the mel scale.

Over 500 Hz, pitch varies logarithmically with frequency: the latter increases at a greater rate than the sensation of pitch. It is estimated that there are 620 pitch levels, each one representing around 4 mels, or, if they are spread over the basilar membrane, 52 micrometres (roughly 6 hair cells). 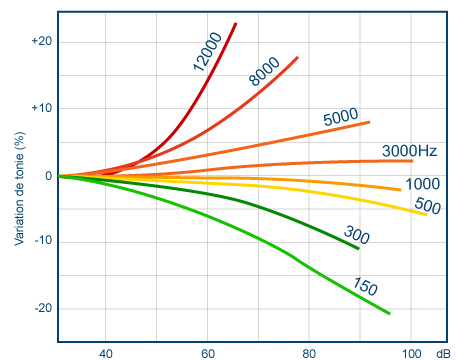 When a sound is short, it loses its spectral purity. Therefore, the shorter a sound, the lower its pitch.

Binaural diplacusis describes when a pure tone has a different pitch when it is heard with the left or right ear. Although more pronounced in hearing-impaired listeners, it also occurs to a certain degree in normal-hearing individuals. The pitch difference has been estimated to be around 3%.

When certain components of a sound are masked by another sound, pitch can be altered.

Timbre is the component of hearing that allows us to distinguish between two sounds of same loudness and pitch. The timbre of a sound is essentially linked to its spectral composition, but also its evolution over time (such as the shape of the spectral envelope or the ‘attack’ of the sound...).

In this way, it is possible to determine the origin of a particular group of sounds. The most common example is the ability to distinguish between different musical instruments. Only timbre allows the distinction between two instruments that are playing the same note (see the chapter ‘Music’).