The study of sound has given rise to various models, each with a particular focus.

This representation shows the evolution of sound intensity over time.

The blue trace shows the evolution of sound intensity of speech over time. This temporal representation allows the visualization of the temporal envelope (in red), which plays an important role in speech perception. 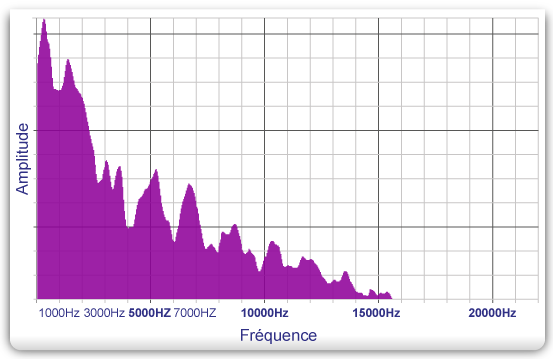 This graph shows the spectral composition of the sound sample used above. This sound contains frequencies from 80 Hz to 15500 Hz.

The spectrogram is a representation of a sound’s power at each frequency over time and is very common in speech studies.

This example clearly shows the evolution of frequency over time, which is indicated by the colour: ‘hotter’ colours indicate higher intensities. Vowels and formant transitions are clearly apparent (highlighted by black lines). This representation is of particular interest as it emphasizes movements (black lines), which have a key role in speech perception.

Spectrum of the French spoken  word « cochlée ». The energy content will vary for each syllable. Each vowel will have three or four peaks of energy, called formant, located at specific frequencies. 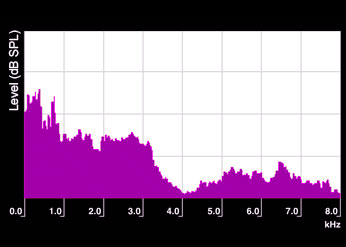 Spectrum of a white noise filtered between 500-6500 Hz. Note that the spectrum is continuous without any specific individual component. 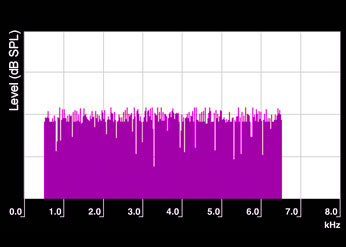 Spectrum of a musical note with a fundamental frequency of 880 Hz (A5). The sound is composed of 7 harmonics, with frequencies that are integer multiple of the fundamental frequency. Note that each component shows a bandwidth larger that expected due to measurement methods. 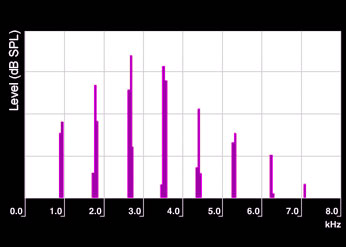 Spectrum of a pure tone at 440 Hz extracted with spectrum analyzer. Note that each component shows a bandwidth larger that expected due to measurement methods. 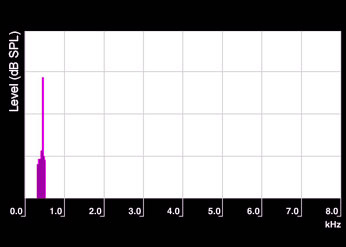 The weakest intensity that the human ear can detect is, on average, from 10-12 W/m2, with the largest around 1 W/m2, or a ratio of one trillion between the two. This scale is difficult to use and has therefore been converted to Bels. These are based on a relative-evolution logarithmic system, or the ratio between two sizes of the same type.

By adding a multiplying factor of 10, a decibel (dB) scale is obtained, which corresponds to that of loudness (the subjective sensation of sound intensity). Therefore, an intensity of 1 W/m2 corresponds to an acoustic intensity level of 120 decibels.

When determining sound pressure level, the decibel unit is often followed by the letters ‘SPL’, which characterize the reference sound pressure p0 = 20 x 10-6 Pa = 20 mPa (this is the minimum sound pressure that the human ear is sensitive to).