To evaluate the cochlear function there are a number of objective methods. Some recordings, as unit potentials, are restricted to experimental approaches in animals. Other recordings, as electrocochleography, may be realized in human subjects.
Oto-acoustic emissions are developed in a specific page.

There are two types of cochlear potentials : individual unit potentials recorded directly from a sensory cell or nerve cell, and compound potentials, recorded at a distance, reflecting the activity of several cells.

A sound stimulation (click) leads to an increase in the numbre of single unit potentials in the individual fibres of the auditory nerve. This increase in the rate of discharge, synchronised with the sound stimulation, is called an evoked response. The presence of action potentials during periods of silence is a reflection of the basal activity of the nerve fibre, also known as its spontaneous activity. 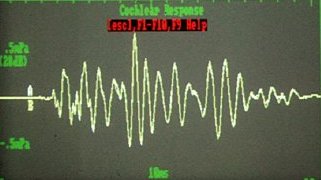 OAEs reflect the activity of OHCs, which are the most sensitive cells of the organ of Corti.
Thus, they can be used as an objective screening test in newborns, but also in adult subjects at risk, for example workers in noisy environments, patients undergoing therapy with ototoxic drugs.

Oto-acoustic emissions are developed in a specific page.