Subjective measures of hearing require active subject participation. The drawback is that they cannot be carried out when the subject is unable to understand instructions (such as in infants), and their results can be artificially manipulated by the subject. The include audiometry and air and bone conduction tests.

Using a tuning fork, a hearing loss can be determined as either conductive or perceptual by comparing air and bone conduction. To study air conduction, the tuning fork is struck to cause it to resonate and it is a brought to the ear. The sound wave travels along the ear canal and through the tympano-ossicular chain towards the cochlea. Bone conduction travels by the vibration of the bone itself when the foot of the tuning fork is placed on the vertex (the top of the skull), or the forehead. This stimulation avoids the middle ear and stimulates the cochlea directly.

The Weber test gives an indication of bone conduction (the probe is placed on the vertex). It is particularly informative in the case of unilateral hearing loss.

In the case of sensorineural hearing loss, sound is perceived by the ear with better hearing (1). As the stimulus is presented to the centre of the skull, it arrives simultaneously at both cochleae. The dominant cochlea (with the lowest auditory threshold) causes the sound to be perceived as localised to that side. The cochlea with increased thresholds does not provide auditory sensation.

In the case of conductive hearing loss, the sound is perceived by the affected ear (2): the sound cannot 'leak' via the ossicular chain, which results in a false sense of amplification compared to the healthy contralateral ear. 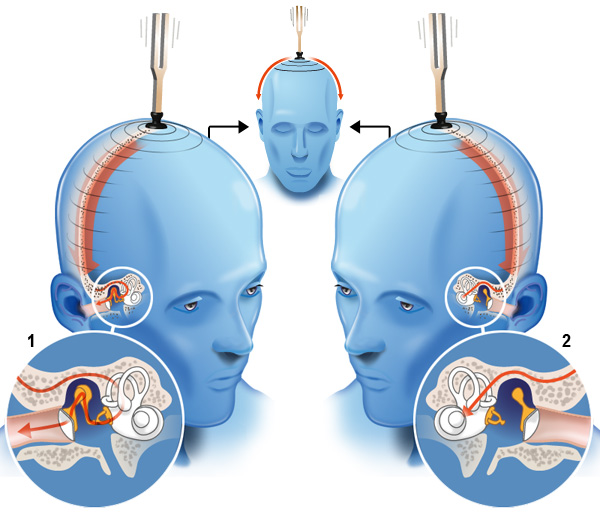 The Rinne test examines the difference between bone and air conduction. The foot of the tuning fork is placed on the mastoid of the test ear (testing bone conduction; note that the illustration is simplified to maintain perspective, the mastoid is situated behind the middle ear cavity), then placed by the ear canal (for air conduction testing). The subject indicates which stimulation method produced the loudest sound. In the case of a conductive hearing loss on the tested side, the sound is perceived as louder for bone conduction than air conduction (3). The tympano-ossicular system has lost its amplifying function. In the case of normal hearing, or sensorineural hearing loss, air conduction is perceived better than bone conduction (4). The tympano-ossicular system maintains its amplification.

Auditory acuity can be measured using an audiometer. This device plays various types of sound (pure tones, broadband noise, white noise, etc) at different frequencies and intensities to determine a subject's hearing range. Similar to conduction testing, tonal audiometry tests air conduction (via headphones) and bone conduction (via a vibrator placed on the mastoid bone). It is carried out in a sound attenuated booth, which must satisfy particular criteria. The audiogram represents the hearing thresholds of a subject for each tested frequency compared to average values determined from a large number of young adults considered to have normal hearing. The audiogram is typically presented in decibel hearing loss (dB HL - see the chapter on the decibel scale).

In adult listeners, this test is generally easy to carry out, but can require efficient masking. The subject is asked to indicate as soon as they perceive a continuous or pulsed sound (even if it is very quiet). The examiner varies the intensity and the frequency of the acoustic stimulus in order to determine the minimum intensity perceived by the subject for given frequencies from 125 to 8192 Hz. Frequencies above 8192 Hz are tested by high-frequency audiometry. Contralateral masking stops the sound from being perceived by the ear contralateral to the test ear. We won't go into masking techniques here, but masking is important to avoid diagnotic errors.

In children under the age of 5 years, tests are adapted depending on the child's attention and comprehension abilities.

Normal hearing subjects: evolution over the course of a lifetime

Each curve represents the average hearing loss in function of age (see pathology/prebycusis).