Speech audiometry is routinely carried out in the clinic. It is complementary to pure tone audiometry, which only gives an indication of absolute perceptual thresholds of tonal sounds (peripheral function), whereas speech audiometry determines speech intelligibility and discrimination (between phonemes). It is of major importance during hearing aid fitting and for diagnosis of certain retrocochlear pathologies (tumour of the auditory nerve, auditory neuropathy, etc.) and tests both peripheral and central systems. 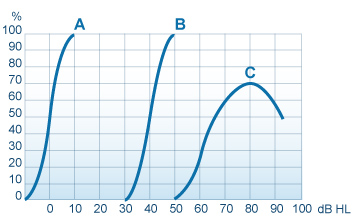 The speech recognition threshold (SRT) is the lowest level at which a person can identify a sound from a closed set list of disyllabic words.

The word recognition score (WRS) testrequires a list of single syllable words unknown to the patient to be presented at the speech recognition threshold + 30 dBHL. The number of correct words is scored out of the number of presented words to give the WRS. A score of 85-100% correct is considered normal when pure tone thresholds are normal (A), but it is common for WRS to decrease with increasing sensorineural hearing loss.

The curve 'B', on the other hand, indicates hypoacusis (a slight hearing impairment), and 'C' indicates a profound loss of speech intelligibility with distortion occurring at intensities greater than 80 dB HL.

It is important to distinguish between WRS, which gives an indication of speech comprehension, and SRT, which is the ability to distinguish phonemes.

Various tests can be carried out using lists of sentences, monosyllabic or dissyllabic words, or logatomes (words with no meaning, also known as pseudowords). Dissyllabic words require mental substitution (identification by context), the others do not.

The test stimuli can be presented through headphones to test each ear separately, or in freefield in a sound attenuated booth to allow binaural hearing to be tested with and without hearing aids or cochlear implants. Test material is adapted to the individual's age and language ability.

What you need to remember

In the case of a conductive hearing loss:

In the case of sensorineural hearing loss:

Phonetic testing is also carried out routinely in the clinic (especially in the case of rehabilitation after cochlear implantation). It is relatively long to carry out, but enables the evaluation of the real social and linguistic handicaps experienced by hearing impaired individuals. Cochlear deficits are tested using the “CNC (Consonant Nucleus Consonant) Test” (short words requiring little mental recruitment - errors are apparent on each phoneme and not over the complete word) and central deficits are tested with speech in noise tests, such as the “HINT (Hearing In Noise Test)” or “QuickSIN (Quick Speech In Noise)” tests, which are sentences carried out in noise.

Speech audiometry generally confirms pure tone audiometry results, and provides insight to the perceptual abilities of the individual. The intelligibility threshold is generally equivalent to the average of the intensity of frequencies 500, 1000 and 2000 Hz, determined by tonal audiometry (conversational frequencies). In the case of mismatch between the results of these tests, the diagnostic test used, equipment calibration or the reliability of the responses should be called into question.

Finally, remember that speech audiometry is a more sensitive indicator than pure tone audiometry in many cases, including rehabilitation after cochlear implantation.