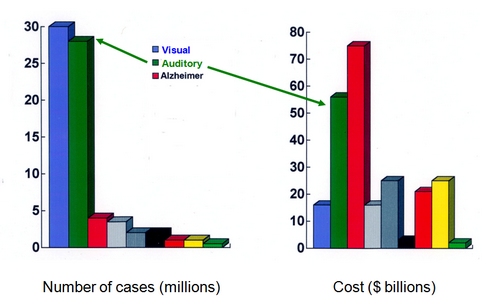 These graphs, created over 15 years ago in the USA, show the the incidence of hearing loss (in green) compared to other neural and sensory pathologies, representing around 10% of the American population. The graph on the right shows the health cost. Today, these numbers are much higher, and are similar across the Western world - for example, a census in 1998 in France showed over 4 million people with hearing loss.

Hearing loss (or hypocusis) is a generic term used to describe a decrease in auditory acuity. A few rare central causes of hearing loss (involving the brain) exist, but the vast majority are caused by issues in the ear. Conductive hearing loss is caused at the level of the outer and middle ear, whereas sensorineural hearing loss (also known as perceptual hearing loss) occurs in the inner ear. Both types can be genetic or acquired.

Conductive hearing loss affecting the outer ear is generally caused by a blockage (such as a build up of wax), in the middle ear it is caused by otitis, ossicular damage (etc...).  The generally moderate loss affects mainly low and quiet sounds - it can be difficult to hear deep or whispered voices.

Sensorineural hearing loss (or perceptual hearing loss) is due to the dysfunction of the inner ear (cochlea) and generally manifest as lesions at the level of the hair cells or auditory nerve.

The two most common cochlear problems that cause sensorineural hearing loss

Conductive and sensorineural hearing losses can be combined in the same ear, causing a mixed hearing loss: for example, a problem in the middle ear (such as advanced otosclerosis) can have repercussions on the inner ear and cause mixed hearing loss.

Hearing loss can have a genetic cause, or occur because of pathology (acoustic trauma, infection, ototoxicity, age). It can also be acquired due to a genetic predisposition: some people are more affected by infection or trauma than others.