Composition of the cochlear fluids

A remarkable characteristic of the cochlea is the unique composition of endolymph. This liquid fills the scala media, and is very rich in potassium (150mM), very poor in sodium (1mM) and almost completely lacking in calcium (20-30 µM).

Endolymph is created from perilymph.
The endocochlear potential is the sum of two potentials: a positive potential caused by active secretion of K+ by the stria vascularis (120mV) and a negative potential created by the passive diffusion of K+ ions from the hair cells (40mV), which can be visualised after an anoxia.

Note that the ionic composition of endolymph develops prior to the endocochlear potential. In fact, in the mouse, endolymphatic ion concentrations are finalised during the first postnatal week. In comparison, the mouse endocochlear potential doesn’t develop until the second postnatal week and doesn’t reach its final value until the third week after birth. 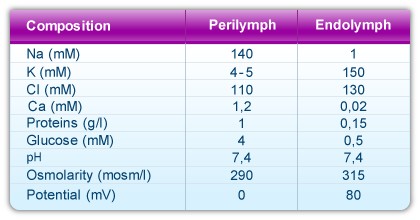 Composition and properties of the two cochlear fluids

It appears that the cochlea has found a way of regulating potassium flow without expending any energy (ATP). Generally speaking, if an ion enters a cell in a passive way, it requires an active mechanism to leave it, and vice versa.

Only the apical pole of the hair cells bathes in the potassium-rich endolymph, which has a positive potential of 80mV. K+ ions therefore enter these cells passively, as there is more potassium in the endolymph than in the hair cell and the latter have a resting potential of -60mV, which favours an influx of K+. These ions also leave the hair cells in a passive manner, due to the higher concentration of K+ ions inside the hair cell, compared to outside of the cell body bathed in perilymph. This all results in a significant saving of ATP by the hair cell.

The stria vascularis, a complex epithelial structure composed of various cell types, produces endolymph and releases it into the cochlea. The basal and marginal cells are true epithelial cells, whereas the intermediate cells are ‘melanocyte-like’. Intricate vasculature provides the oxygen and nutrients needed for the stria vascularis to function correctly. 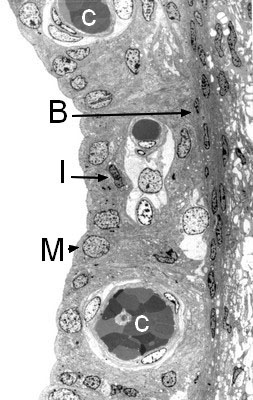 Finally, chlorine ions, which enter the cell at the same time as sodium and potassium ions via the co-transporter NKCC1, are expelled by CIC-K chlorine channels associated with their regulating beta-subunit, barttine. Mutations in barttine expression are responsible for Bartter’s syndrome; causing both tubulopathy and hearing loss. Potassium is finally secreted into scala media via KCNQ1 potassium channels associated to their regulating subunit KCNE1. Mutations in these two genes give rise to Jervell and Lange-Nielsen syndrome, causing bilateral hearing loss and a long cardiac QT.