Sound waves picked up by the external ear vibrate the eardrum, which in turn mobilizes the ossicular chain of the middle ear. The footplate of the stapes applies a mechanic pressure on the oval window and the vibration reaches the perylymphatic fluid of the cochlea. 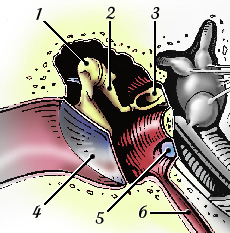 The eardrum (4) or tympanic membrane separates the external auditory canal from the middle ear which communicates with the nasopharynx via the Eustachian tube (6). The oval window (hidden by the stapes footplate: 3) and the round window (5) separate the middle and inner ears. The ossicular chain: malleus (1), incus (2) and stapes (3) links the eardrum to the oval window. The surface ratio of eardrum to oval window (20/1) allows an adequate energy transfer of the sound pressure between the air and the fluids of the inner ear. The middle ear can be considered as an impedance adapter - without it about 98% of energy would be reflected back.

An intense sound (> 80 dB) trigger this reflex. A feed-back loop (midbrain) contract mussels (in Human, only stapes), which tighten ossicular chain and results in less energy transfered to the cochlea. This reflex ( more details elsewhere) only works for low frequencies (< 2000 Hz).

This internal view of the middle ear cavity allows understanding of how the ossicular reflex may reduce the transfer function of the ossicular chain. This reflex protects the cochlea against loud sounds, but this type of protection is quite limited:

Another function of the ossicular reflex is to attenuate perception of one's own voice: this is especially important for singers.

Function of the Middle Ear

The middle ear (ME) transmits acoustic energy from the tympanic membrane (TM) to the inner ear, by allowing adjustment of the difference in impedance between an air environment and a fluid environment.

If the sound pressure waves in the air were applied directly to the inner ear fluid, 99.9% of the acoustic energy would be lost because of their reflection at the air /fluid interface (equating to a loss of approx 30dB).

The middle ear acts as a pressure amplifier: in this way it is able to “capture” the available acoustic energy in the air, and augment the amplitude of the mechanico-acoustic stimuli in the inner ear.

Because of the relationship between the surface areas of the TM (area S1 = 0.6 cm2) and the stapes footplate (area S2 = 0.03 cm2), and because of the interaction of the ME levers (the axis of the ossicular chain passes very close to the incudomalleolar joint, but the two arms of this lever are of unequal length, d1/d2 = ~ 1.3), the pressure amplification is theoretically in the order of x26 (approx 28 dB)

Beware, however! This calculation must be used with caution, because, due to its mechanical characteristics, the behaviour and the efficiency of the ME varies greatly with varying frequency of sound (f). In effect, ME function (similar to any type of mechanical system) depends on the friction (R) of the ossicular joints, the mass of the drum/ ossicular chain, and the rigidity (K) of the various membranes, ligaments, air volume and so on.

More about physics (see below)

The mechanisms described above become obvious when one studies the transference function of the ME, ie the complex interaction between amplitude and phase that exists between the acoustic pressure at the entrance to the inner ear (Pv: pressure within the perilymph at the base of the scala vestibuli) and the pressure at the TM (Pt): Pv/Pt.

Auditory thresholds and transfer function of external and middle ear

The shape of the auditory thresholds (shown here in man in a straight line) is equivalent to the global transference properties of the external and middle ear together (dotted line). This holds true for all mammals. (graph: P. Minary)

We can therefore arrive at two conclusions: