The superior olivary complex (SOC) is, functionally and anatomically, one of the most complex structures of the auditory system. It is composed of a number of nuclei and peri-nuclear regions that constitute an intense neuronal network with numerous ascending (to nuclei further up the auditory pathway) and descending (to the cochlear nuclei and cochlea) projections. The SOC is involved in complex analyses and filters the auditory information on the way to the cerebral cortex. It is also has an important role in elaboration of some reflexes that are key to human survival and the protection of the auditory system. Finally, the SOC vital to localising a sound source, but it shares this function with other structures (notably the inferior colliculus) and will be the subject of a dedicated page.

The SOC is a major center of integration and regulation of ascending and descending auditory information.

1. It receives information from the cochlear nuclei.

2. It analyses this information in its own neural circuits, even to locate the origin of a sound in space.

3. It sends this altered information to numerous neural structures.

The SOC is composed of a large number of neurons in the nuclei and peri-nuclear regions which are symmetrical on either side of the midline.

The main neuron types, implicated in the functional description that follows, are also indicated in the diagram. 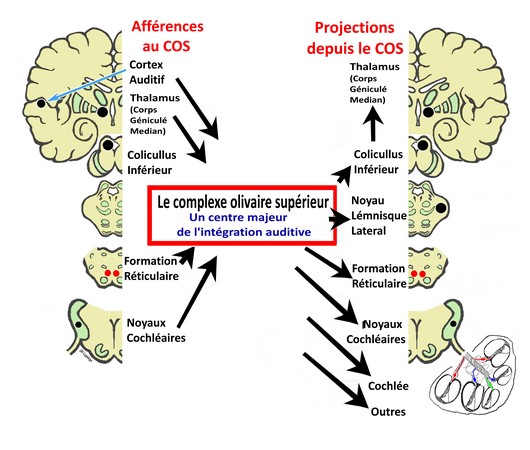 The SOC recieves auditory information from the cochlear nuclei, processes it, and passes it on to the inferior colliculus.

The activity of the SOC is controled and regulated by:

The SOC also sends projections to: 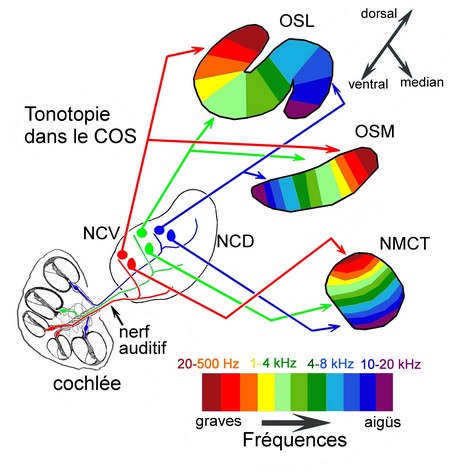 Protection and modulation of peripheral processes

Neurons of the SOC send descending fibers (efferents) to auditory receptors and establish reflex circuits with modulative or protective roles (notably against noise trauma). These efferent neurons are themselves controlled by descending fibers from higher auditory centers.

IHCs synapse with the type I spiral ganglion neurons, which form the radial afferent system (= auditory nerve, in blue) linking the cochlea with the cochlear nuclei. From here, the auditory signal is passed to the brain. The lateral efferent system (in pink), which has its origin in small neurons in the lateral superior olive (2) has a feedback role at the level of the IHC/ afferent fiber synapse.
This efferent circuit releases dopamine to protect this synapse from excitotoxicity (ischemia or trauma).

The outer hair cells (OHCs) synapse with the small dendritic nerve endings of the type II spiral ganglion neurons and make up the afferent spiral system (in green). The role of this system is currently unknown, but it may have a role in informing the nervous system about the contractile state (electromotility) of the OHCs.
The OHCs are directly innervated by the large axon terminals (in red) of the neurons located bilaterally within the medial superior olive (MSO): this is the medial efferent system. Its role is to moderate the active electromotility of the OHCs.

Note: to enable a clear view of the fibers, the Deiter's cells have not been included in the diagrams.

Protection of the middle ear

If a sound is too loud, damage to the auditory receptors can occur, causing temporary or permanent hearing loss or tinnitus.

These circuits involve the SOC and other motor nuclei in the brainstem that cause the contraction of the middle ear muscles. There are two complementary reflexes which act on the ossicular chain and can reduce the intensity of a sound (to the point of cancelling it):

Upon detection of a loud sound (> 80dB), the cochlea transmits information to the brainstem nuclei (cochlear and SOC). A reflex loop activates the contraction of the middle ear muscles (in humans, however, only the stapedial muscle contracts). This leads to increased rigidity in the ossicular chain, which limits movement at low and mid-frequencies (below 2 kHz) and causes a decrease in the energy transmitted to the inner ear. This reflex does not protect against high-frequency noise damage. 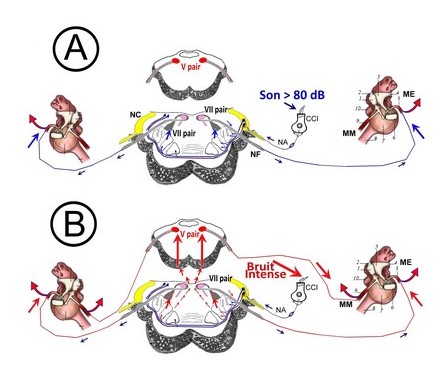 The middle ear reflexes decrease the transfer of information between the external ear and the cochlea; they protect the cochlea against acoustic overstimulation... with the following limitations:

Another role of the middle ear reflexes, caused by vocalisations, is to suppress the perception of one's own voice and internal sounds. This can be particularly important for singers.

Note: Schematic view of the middle ear cavity showing how the activity of the ossicular chain can be modulated by the tensor tympani (9) and stapedial (5) muscles