Human auditory cortex represents 8% of the surface of the cerebral cortex. Unlike other cerebral areas, there are key structural differences between the auditory cortices of different mammalian species, as well as between apes and humans.

The human auditory cortex can be studied using functional magnetic resonance imaging (fMRI), and is divided into more than a dozen different regions surrounding Heschl's gyrus in the superior part of the temporal lobe. Auditory cortex, narrower in humans than in other mammals, develops from front to back within the Sylvian fissure at the point where it joins Heschl's gyrus.

Anatomical distribution of the auditory cortex 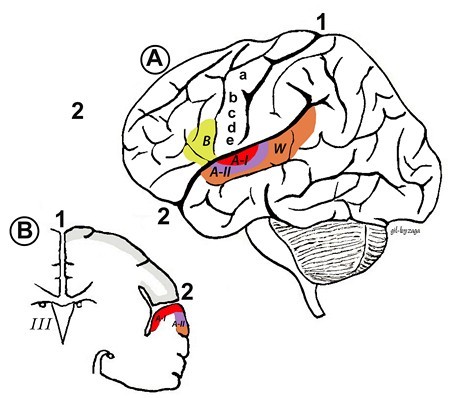 Structure and circuitry of the auditory cortex: Columnar organisation

The presence of six cell layers in the auditory cortex is common to all mammals, but species differences take the form of the commonality of each cells within each layer. In humans, pyramidal cells (including all types) correspond to 85% of AI. The remaining 15% are multipolar or stellate cells. Inverted stellate cells also exist (Martinotti cells) as well as cells with candelabra-shaped dendritic configurations.

Most ascending fibers originate in the MGB and synapse with the pyramidal cells of layer IV, but this is not always the case. However, these contacts represent only 20% of the excitatory fibers that project to cortical neurons: the other 80% comes from other neurons in the ipsilateral cortex.

Neurons in AI and AII are functionally organized into columns, first described by Lorent de Nó. Cortical columns receive input from both MGBs and are therefore bilateral, working on the principal of summation/suppression. Summation corresponds to similar afferentation from both ears, with a contralateral dominance. Suppression is ipsilaterally dominant.

Cellular organisation and circuitry of the human auditory cortex 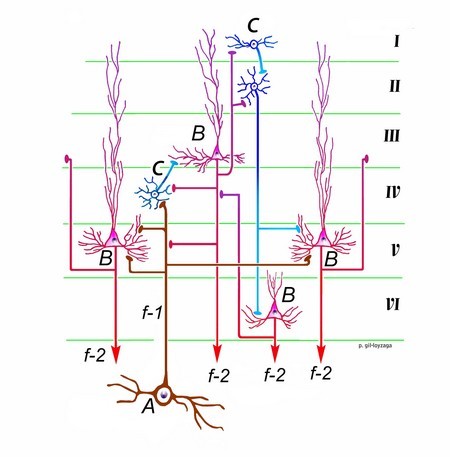 Specificity of the human auditory cortex

While other levels of the auditory pathways are very similar within species, the human neocortex is characterized by the predominence of pyramidal cells (85% of cortical neurons), and some very specific types of cells such as inverted pyramidal cells and candelabrum neurons. Another specificity is the massive interconnection of cortical neurons, which accounts for 80% of excitatory synapses in the neocortex. Only 20% are coming from the medicular genicular body !